Sugar, Consumerism, and the Parallels between American and English Consumerism

Though largely grown in the West Indies, sugar became an important good for both colonial Americans and British subjects across the Atlantic. Though Virginians like Alexander Henderson—who owned a general store in Colchester—understood their climate was unsuitable for growing sugar at the same rates the West Indies could, they increasingly enjoyed the sweet addition to their diets much like the English.[1] The British writer David Hume even reflected this idea when, in 1762, he wrote, “America has sent us many good things, Gold, Silver, Sugar, Tobacco…” His words suggest a beneficial relationship between America and its mother country—a relationship heavily built around the profitable product of sugar.[2] Sugar proved to be  significantly important to the British, as evidenced by Hume placing it on the same list as gold, silver, and tobacco.

The West Indies first began profiting from the production of sugar in the 1640s, but it proved to be strenuous, difficult work which had to be done quickly so the sugarcane would not spoil.[3] The need for strength and speed in sugarcane production led to the introduction of slaves to the islands, whose population rose dramatically to outnumber the white population by 1660. Because of the increase in both the slave and white populations, sugar production skyrocketed through the second half of the seventeenth century so profoundly that the English West Indies produced an estimated 25,000 tons of sugar in 1700—more than the Portuguese and Dutch combined.[4] The increase in sugar production coincided with a decrease in price and with rising standards of living.[5] Because of this affordability, people of varying economic statuses could afford to buy sugar, both in the colonies and in England. The newfound accessibility to sugar had profound impacts on both British and American diets.

In 1761, for example, two pounds of sugar sold at Alexander Henderson’s store in Colchester, Virginia, for only one shilling six pence. By comparison, one quart of rum may have cost as little as one shilling three pence. This affordability allowed William Bronaugh, a frequent patron to Henderson’s store, to buy over fifteen pounds of sugar between late January and early April 1761.[6] While affordable, the bulk of sugar bought in such a short amount of time hints at the massive amounts of the sweet substance sent to both the mainland colonies and Britain through the eighteenth century. Before sugarcane grown in the West Indies could be sold to the mainland colonists, it needed to be sent to England for refinement.[7] This additional step further created bonds between the growing consumerist attitudes on either side of the Atlantic, as both places were closely linked within the processes of refinement, shipping, and importation of sugar.

Politically, the passage of the Sugar Act in 1764, in which the British government levied a tax on imported sugar to the colonies, proved to have a profound impact on the colonists. Though the tax would contribute to the growing resentment the colonists felt toward England throughout the middle of the eighteenth century, the decision to tax sugar proved to be an important one in regard to the parallels between English and American consumerism. The British were aware of how much money they could raise by taxing such a popular and accessible good; similarly, the American colonists quickly discovered that the tax greatly affected them, as the popularity and accessibility of sugar meant many colonists bought the product and paid the taxes.[8] These trends, happening around the same time that Henderson was operating his store in Colchester, and seen in the purchases of William Bronaugh, all culminate to form a distinct parallel between American and English consumerism in early colonial history. 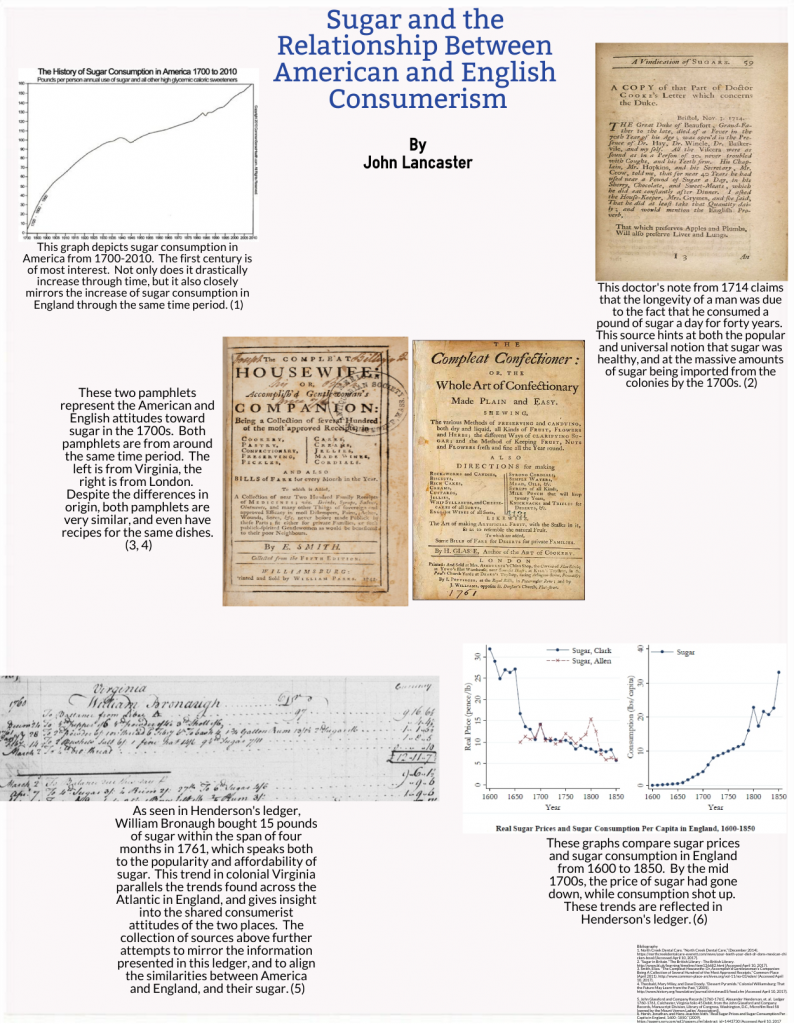