Clothing is a status symbol. If you have the nicest pants on the block, chances are they were expensive, and you bought them to show off. The clothing people buy tells us about who they are and for what purpose the clothing is intended. Cotton is undoubtedly one of the most well-known fabrics for clothing, and throughout history it has been used in a variety of ways. Cotton was used in sails, towels, fishing nets, and bookbinding in addition to clothing.[1] Using the accounts from the John Glassford and Company store in Colchester, Virginia, from 1760-1761, as well as conducting my own research, I have been able to uncover some information about what the fabrics of the time said about the people who wore them.

In the eighteenth century, cotton came in many forms, each with its own distinct functions. Muslin was a form of cotton that was made in India. Although it could be manufactured into varying degrees of softness, it was well known for being fine.[2] The most popular use for muslin—a fabric similar to gauze—was as a dress material. The people who bought muslin came from a higher tier of society, and were either women or purchasing it for women. At the Colchester store, I found an example of this in the account of Henry Taylor when he bought some women’s gloves and muslin, possibly for his wife.[3] Portraits of wealthy women show them dressed in muslin attire.[4]

Another specific kind of cotton was known as printed cotton. This fabric was often decorated with floral designs and was used for multiple purposes, such as home décor and quilts in addition to clothing. In the early eighteenth century, both England and France had placed bans on printed cotton for domestic production because it quickly became a competitor for imported silks, but by mid-century these bans had been lifted and printed cotton became more widespread on the continent. The American colonies, however, had always had a large market for this kind of cotton.[5] At the Colchester store, I found that mostly men bought printed cotton. William Turner bought two yards, Leonard Dozer six yards, and Henry Taylor one and a half yards.[6]

However, a few women also purchased this fabric, such as Elizabeth Pierce and Elizabeth Fallen, who bought one and a half yards and seven yards, respectively.[7] Each customer at the Colchester store who bought this particular kind of cotton paid a range of prices, from as little as 1 shilling 1 pence for half a yard to as much as 1 pound 15 shillings for 14 yards, with variations in between even for similar amounts.[8] Using a sample of purchases of printed cotton and comparing them to the few instances of muslin being purchased, it is clear that printed cotton was slightly more affordable than muslin. For example, one and half a yards of the former sold for 7 shillings 1½ pence, whereas the same amount of muslin went for 10 shillings.[9]

Each of these specific types of cotton was worth more than the parent fabric. The purchases of both muslin and printed cotton show that customers at the Colchester store were searching for visible ways to express their wealth, or even to give the impression they had more wealth than was the reality. Just like today, appearances mattered. 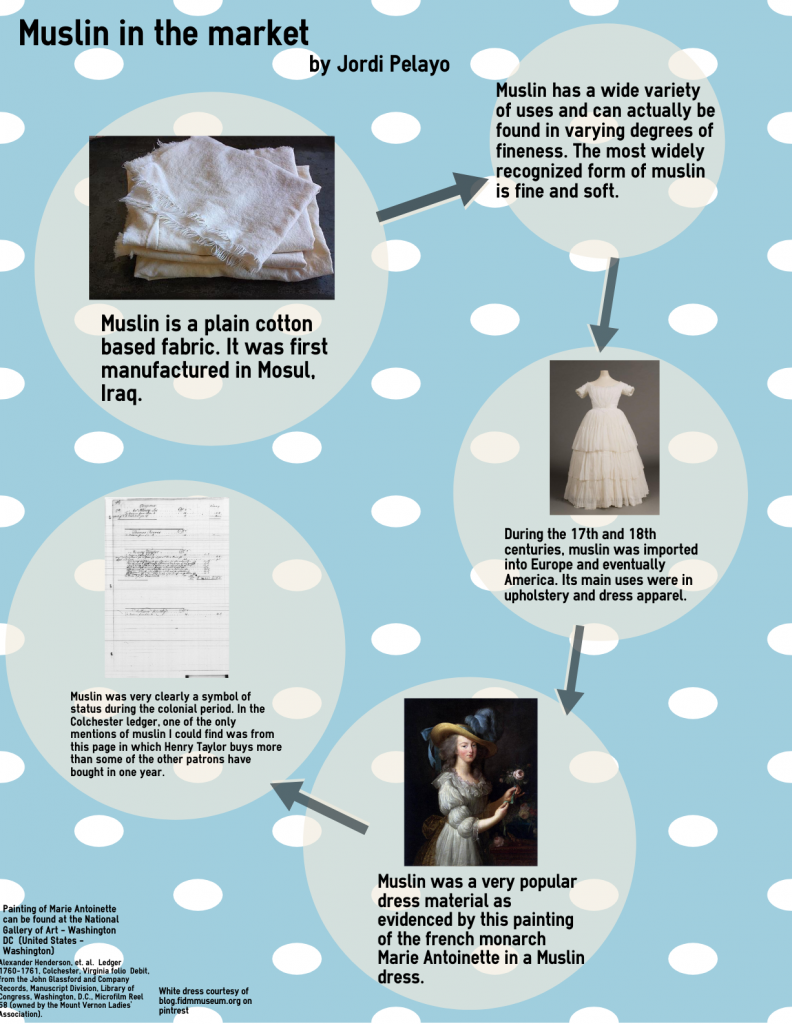