Among the many items bought and sold at the Colchester store (1760-1761) in Fairfax County, Virginia, was a rather timeless piece, an almanac.[1] Almanacs were yearly books that kept records of the special events happening each year, of statistical or important information, and of weather patterns. For this reason, an almanac from 1760 would prove to be extremely enlightening to certain aspects of colonial American life. Each colony had its own almanac tailored to its specific region and communities. Virginia’s almanac written in 1760 for the year 1761 was put together by Theophilus Grew, and printed and sold by William Hunter.[2] Not much is known about the writer, but we do know some about Hunter.

William Hunter lived in Williamsburg, Virginia, was the official printer for the colony of Virginia, and published the Virginia Gazette—a popular newspaper. He was also a deputy British postmaster for all the North American colonies. In an effort to rebuild the postal system of the colonies, Hunter worked with the famous founding father Benjamin Franklin, Pennsylvania’s postmaster. Soon after Hunter printed the almanac for 1761, he died after being  sick with fever for many years.[3] The more I read the almanac and its contents, the more it seemed like the Facebook wall of the colonial period.

Although the weather was a good chunk of the first half of the almanac, there were plenty of small pockets of information riddled within each page and even full paragraphs on a wide array of topics from food and drink, to analogies, and even a poetic verse on how the writer wanted his wife to be like an almanac and change yearly. On the second page of the almanac, it gave a depiction of the anatomy of the human body in relation to the zodiac signs – the same signs still used today and shared on social media platforms like Facebook. Much of the important dates in the almanac revolved around religious holidays and holy days, but there were a few dates that stuck out as odd. In January, it reminded its readers that on the 30th of that month in 1649, King Charles was beheaded. In April, it showed that they had an April Fool’s day, just like today. Another similarity to Facebook was that each of the month’s pages started with a short poem or proverb like memes often shared by those whom find them to their liking. In September, one of the poems was: “The happiest man that ever breath’d on earth, with all the glories of estate and  birth, had yet some anxious care to make him know, no grandeur was above the reach of woe.”[4]

After all information regarding weather for the year was included, the author went into statistical information for the local courts of Virginia and how far the towns in the colony were from each other, not only in Virginia but also other colonial centers. Advertisements were another important aspect of almanacs. Just like in newspapers and Facebook feeds, businesses were promoted to the public, from jewelers to book binders. Almanacs also included the “life-hacks” of the time and recipes for food items and drinks. The almanac discussed what types of clothing to wear when traveling and what accessories to bring to be prepared for any  weather. Another life-hack involved adding shavings of green hickory wood to your common beer to make it taste better than fine ale, all while costing virtually nothing. The articles continued with titles like, “Methods for preserving the virtues of lemons and oranges for years” and “LIQUOR made from Indian Corn.”[5] These types of titles suggest that people, just like today on Facebook, were looking for simple tips and tricks to improve life and how-to guides. While  back then, they did not have the same avenues to share information like we do today, the almanac proved to be a fascinating and diverse publication to be used in a variety of ways: to inform, to explain, or to entertain. 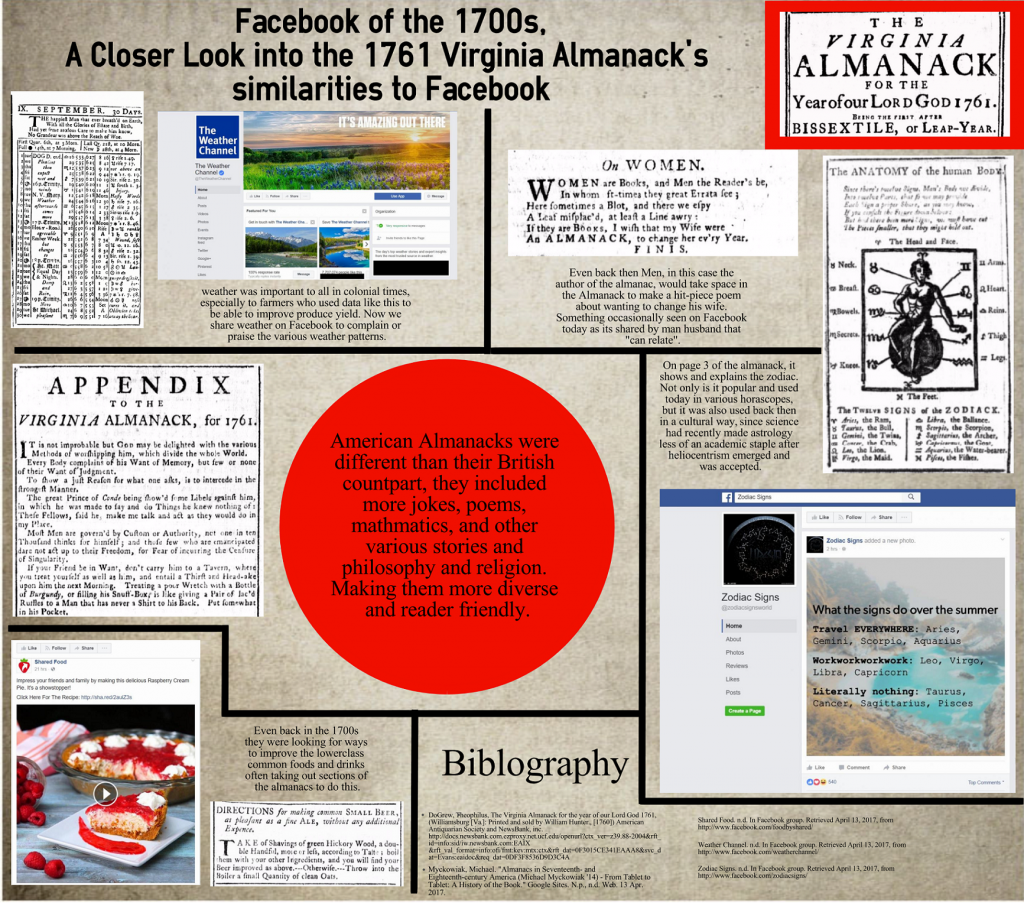