Horsing Around: The Cost of Horse Ownership in 1760 Virginia

Throughout much of their domesticated history, horses have been considered expensive animals to own. Many societies considered the animal as a mark of status.[1] That was true even in British colonial America. Not native to the American continent, horses were introduced by Europeans who ventured across the ocean. In the early years of the colonies, horses were a visible manifestation of wealth, but by the first half of the 1700s, they had become commonplace and most people owned at least one horse.[2] By the 1760s, horses were likely a normal sight across the countryside. Based on the 1760-1761 ledger for the Glassford and Henderson store ledger for Colchester, Virginia, the number of people purchasing various pieces of horse tack attests to the size of the local equine population. However, even with a large number of the population owning horses, feeding and working them continued to be an expensive venture.

Shoes, feed, saddles, bridles, curry combs: all of these things made at least a handful of appearances in Alexander Henderson’s 1760-1761 account ledger, bought by 30 different individuals over some 161 pages of transactions.[3] Henderson himself was the caretaker of at least four different horses: a gray, a black, a roan, and a bay.[4] He spent £70 on the horses themselves and an additional £18 on feed for them from October 1760 to December 1761 alone.[5] He paid for shoeing the horses on a regular basis, usually every two to three months. The shoes protected the horses’ hooves from painful stones. In addition, Henderson also paid for horse feed—mostly hay and oats, but none of the other account holders seem to have paid for feed through the Colchester store.[6] Perhaps this was because they all either worked on or owned land where their horses could freely graze.

Land was important, because land meant wealth, which meant you would be better able to care for at least one horse, sometimes more. Though the most common equine item bought from Henderson’s store was the snaffle bridle, the most expensive was the “Womans Saddle with Slip Cover of Blue Cloth” at £8.[7] (Buying a bridle at the same time added another 10 shillings to the cost.) When compared with the next most expensive item—the men’s saddles at about one to two pounds—it becomes apparent that the women’s saddles were one of two things: a luxury good, or simply more costly to make. Given the time period and the social views on horses at the time, the latter seems more likely. This becomes even more evident when reviewing James Hardage Lane’s account as he purchased both a men’s and a woman’s saddle in the space of five months.[8]

As mentioned above, snaffle bridles were the most common good purchased in regard to horses. Snaffle bridles differed from other bridles, such as the half-curb, because of the type of bit used. Bits are metal pieces that go into a horse’s mouth and rest between the front cropping teeth and the back grinding teeth.

Snaffle bits in particular are very easy on a horse’s sensitive mouth, and even today are the most common bits used by equestrians.[9] Because of their high occurrence in the pages, it is easier to detect a price pattern. Of the 16 snaffle bridles purchased, six of them sold for 3 shillings 9 pence, three of them for 4 shillings 6 pence, and the rest ranged from 4 shillings 3 pence to 1 shilling 10 pence in price.[10] The frequency of these purchases further shows the widespread ownership of horses.

Another important factor in keeping horses is that they need to be groomed. Grooming is done using a certain kind of brush called a curry comb. Though there are only three incidences of curry combs being bought from Henderson’s store, all for 3 shillings 6 pence, Henderson ordered “1 doz. Curry Combs & brushes” on three separate occasions from 1759-1760 from his employer.[11] This is another example of how many people must have owned horses, despite their cost, because Henderson likely would not have ordered more than he had thought he could sell.

Overall, horses were expensive to keep in the eighteenth century, much as they always have been. Though the account pages do not list many occurrences of horse feed, the other expenses add up. While horses were likely used for work, such as to plow fields and transport goods to market, most of the evidence shows that people rode their horses, whether for business, pleasure, or sport. Indeed, aside from one’s own two feet, horses were the main form of transportation of the time. It makes sense that people would invest such a large amount of money in their transportation—not unlike today with our cars. 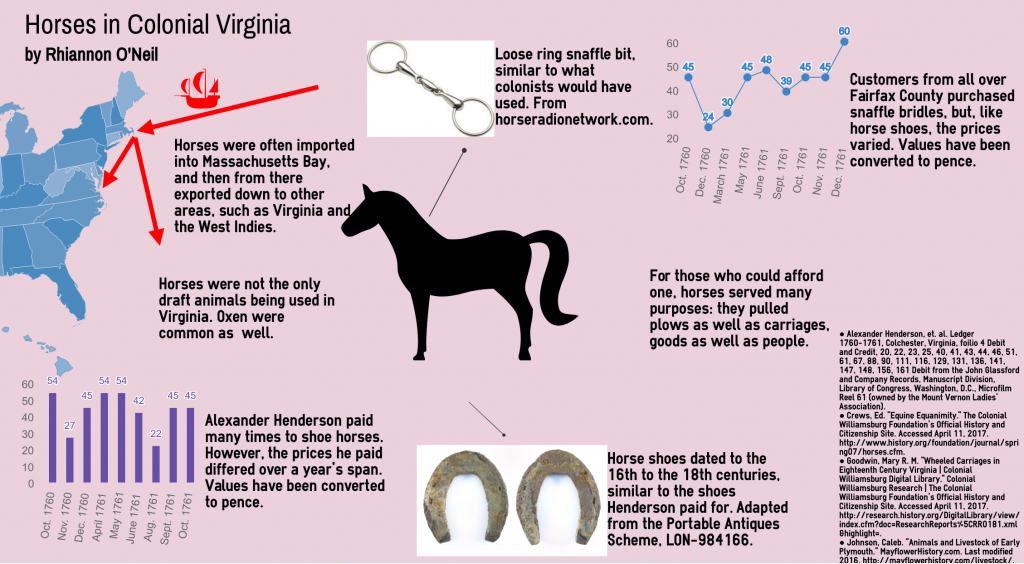