Tobacco: The Most Versatile Cash Crop

In colonial America, tobacco was one of the most influential crops in cultivation. Colonies like Virginia profited heavily from its agricultural success. The successful cultivation of tobacco began when John Rolfe planted South American tobacco seeds called Nicotiana tobacum in 1612. From there, “tobacco production spread from the Tidewater area to the Blue Ridge Mountains, especially dominating the agriculture of the Chesapeake region.”[1] It became such a huge commodity that the Virginia House of Burgesses made it a requirement for tobacco to be inspected, and directed the construction of warehouses and port towns where tobacco would be brought by planters.[2] As tobacco became more valuable, its uses expanded from smoking to use as currency. It was used for just about anything: purchasing indentured servants and slaves to cultivate the crop, paying taxes, or purchasing manufactured goods and items from the local store.[3]

What really caught my attention was something much more interesting than the tobacco itself. While transcribing ledgers from the Colchester store accounts (1760-1761) of John Glassford and Alexander Henderson, I noticed that not all of the people paying their accounts were doing so with their own tobacco, but tobacco from other people. This intrigued me because obviously people that grew tobacco could use it as currency, but how did a random man use someone else’s tobacco as a form of currency to pay their account? The answer was that tobacco itself became a source of social currency as well as money. It became a way of paying off your accounts and a way of paying others, who then purchased items at the store using someone else’s tobacco as payment.

The picture above is an example of account credits from the Colchester store (1760-1761) of Glassford and Henderson. This account belonged to a man named Daniel Laughlin. On  July 31, 1761, Laughlin credited a crop note for 1 hogshead (a barrel) of tobacco from the Pohick warehouse to pay for his account.[4] He used tobacco as payment so that he could purchase items from the store. What I found interesting was the interesting mark indicating the tobacco’s “ownership” or tobacco mark: a capitalized I, a superscripted S, and a capitalized A. It reads ISA, which was a tobacco mark that represented not Daniel Laughlin but Joseph Stephens. Tobacco marks most frequently matched the initials of the owner (in this case it would be DL which was identified as Laughlin’s mark in 1759).[5] This ledger shows that Daniel Laughlin credited the Colchester store 1 hogshead of Joseph Stephens’ tobacco; in September, 1761, Stephens paid his account with an additional hogshead of tobacco.[6]

I found no immediate relationship between these men in the ledger other than that Laughlin used Stephens’ tobacco to buy goods that he needed. As a local landowner, Stephens may have hired Laughlin for some service and paid him in tobacco. Regardless, Laughlin profited by nine pounds, 19 shillings on the transaction enabling him to purchase many different fabrics from the Colchester store: cotton, bearskin, osnaburg, roles, linen, striped Holland, German serge, shalloon, sheeting, ferrit, check, and buckram.[7]

Through my research I learned a lot about what eighteenth century life was like. Tobacco opened up a new world of possibilities for American colonists, and it widened the range of its uses as time passed. People not only used their own tobacco as currency, but they used that of others as well. They exchanged tobacco for goods or paid other people with the crop, who then used it as currency in the local economy for whatever they needed. Although I do not know the specific relationship between these two men, they were  connected through tobacco. Tobacco brought them together in a way that was beyond currency. It went from being a cash crop to a social crop. It brought individuals, families,  and communities together. In my opinion, tobacco was not only the most valuable crop monetarily, but also culturally. Tobacco became its own culture and that is what had an effect on me while doing my research. I was inspired by how this leafy green and relatively ugly looking plant took over the colonial economy and also impacted people’s lives. 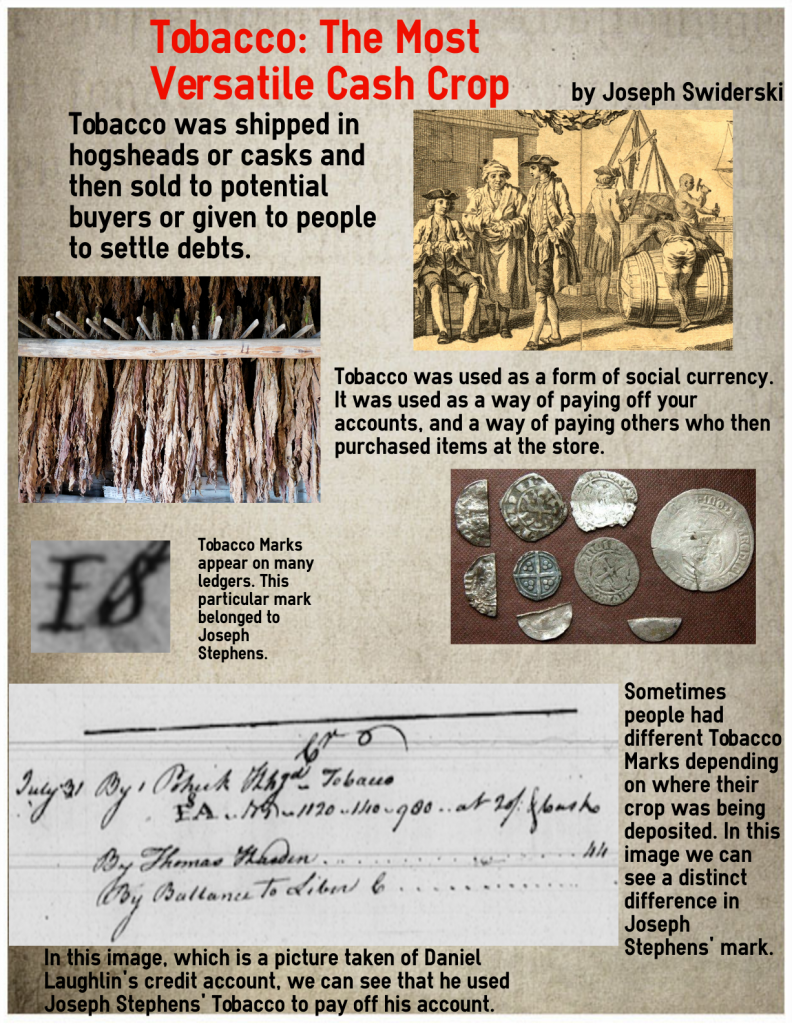