Tobacco on the Occoquan: A Smooth Sailing Economy

Tobacco was the foundation of the Chesapeake’s economic prosperity throughout the eighteenth century. By the late 1780s, Virginia and Maryland were exporting some 80,000 hogsheads worth of tobacco yearly to Great Britain, the primary port of destination. In London, Chesapeake planters exchanged their produce for manufactured goods or consigned it for papered bills.[1]

Tobacco was so valuable at that time that it was often used in place of currency. In Glassford and Henderson’s Colchester store ledger for 1760-1761, tobacco was both a commodity to be bought and a form of payment for purchasing material goods available at the store.

However, despite its importance to the economy of Virginia, the plant proved to lend itself to an unstable market. The value of tobacco often fluctuated depending on the harvest yield, popular demand, and other unforeseen and uncontrollable variables. In 1727, oversaturation of the market and the decline in prices sunk the worth of tobacco so low that planters found it difficult to make a living from its production.[2] Virginia Governor William Gooch, hoping to relieve the colony’s economic woes, set into motion a series of laws which would come to be known as the Tobacco Inspection Act of 1730. The laws were designed to reduce the number of inferior grades of tobacco being sold to Britain, thereby preventing chronic overproduction and allowing for an increase in market price. The act called for the construction of several warehouses throughout the colony where planters would be required to send their tobacco for inspection prior to its exportation to Britain.[3]

At Glassford and Henderson’s store in Colchester, any written record of the transaction of tobacco was generally accompanied by the name of the location of a warehouse. From the 1760-1761 store ledger, it appears much of the tobacco bought and sold within the store stemmed from a warehouse located along the Occoquan River.[4] While little other information regarding the warehouse is given within the ledger itself, it can be inferred that Glassford and Henderson’s customers likely exchanged most of their tobacco from here due to the warehouse’s relative proximity to the store.

The first mention of a warehouse being built on the Occoquan comes in 1734 when authorities established one on land previously used as the site of a copper mine owned by a man named Carter.[5] The construction of the warehouse along the river and the creation of Prince William County in 1731 (south of the Occoquan River) led local landowners north of the Occoquan River to petition the Virginia Assembly for the founding of a new town and county. In 1742, the County of Fairfax was officially created, named in honor of Thomas, Sixth Lord of Fairfax, and composing some 399 square miles.[6] Eleven years later in 1753, The General Council laid the foundation of what would become Colchester, Virginia, when they called for the surveying of land “lying and being on Occoquan river in the county of Fairfax…beginning on the upper side of the ferry landing, and extending down the said river…”[7] Located near the bustling north bank of the Occoquan River, Colchester became a prominent tobacco port town and the site for Glassford and Henderson’s store.

In 1762, further legislation passed by the Virginia General Assembly had the Occoquan warehouse discontinued, citing the “ruinous” conditions of the building and its inconvenient location so far removed from the county’s main port of trade—Colchester. The new warehouse was to be established in the town Colchester on the property of a local resident, Benjamin Grayson, where it would remain until the end of the Revolutionary War.[8]

The Occoquan River warehouse was just one of many such buildings erected throughout Virginia on the south side of the Potomac River and its tributaries. These public warehouses were overseen by inspectors, generally themselves planters, who were appointed yearly by the justices of Virginia’s county courts.[9] With two inspectors assigned to every one warehouse, these men were charged with assuring the quality of the tobacco being sold within the market.[10] Planters whose tobacco passed inspection were given crop notes or transfer notes which could be exchanged for goods.[11] These notes were used as a form of money and created a system of exchange based upon the value of tobacco.[12] Any tobacco that failed to pass the inspector’s judgment was burned.[13]

At Glassford and Henderson’s Colchester, Virginia, one sees numerous credit accounts in which customers purchased their goods either through the use of notes or, more commonly, via transactions of hogsheads full of tobacco. The overwhelming majority of these containers had their origins listed as being from “on the Occoquan” likely in reference to the warehouses where the crop had been inspected.

Tobacco was at the heart of the Virginia economy, and in that sense, it was the lifeblood of the Glassford and Henderson store. The passing of the Tobacco Inspection Act of 1730 led to an explosion in the productivity and value of the tobacco trade. The subsequent establishment of the Occoquan Warehouse and the tobacco ports culminated in the founding of both Fairfax County and the important trading town of Colchester, Virginia. Tobacco allowed Virginians a means of purchasing British manufactured goods, exchanging bills, notes, and hogsheads as an alternative form of currency which could be used to buy nails, linen, glass, china, rum, salt, and other popular or necessary commodities from local shops like the Colchester store. 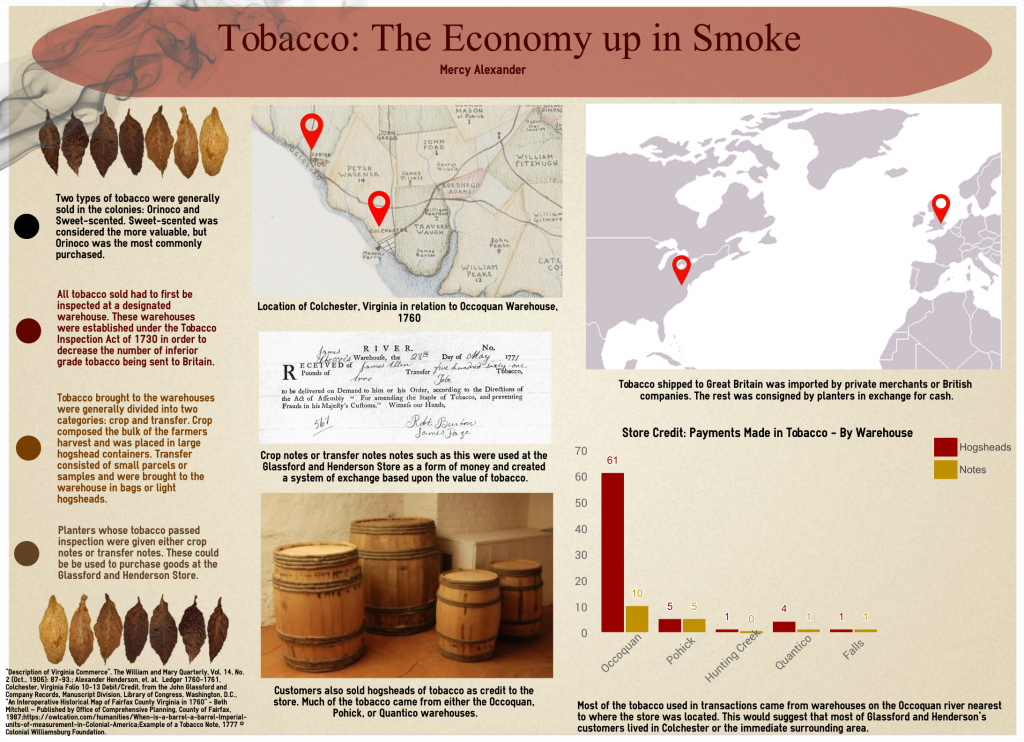