The Fairfax Arms: The Place to Be

The town of Colchester, established in 1753 by the Virginia Assembly, was laid out in a triangular shape and consisted of forty-one lots and a marketplace.[1] Colchester quickly became a thriving port town, shipping tobacco to Great Britain.[2] One of the earliest businesses to be established in the port town were ordinaries or taverns that provided a place where merchants, craftsmen, and planters could go and enjoy good fare, talk about life or business, all in a warm and friendly environment.

Situated approximately three hundred meters from the Occoquan River along Essex Street (formerly known as the King’s Highway) stood the Colchester Inn, commonly known as the Fairfax Arms Tavern.[3] On May 17, 1756, lot 21 was one of six lots purchased by Benjamin Grayson that became the Fairfax Arms Tavern.[4] William Linton rented the property from Grayson and was granted a license to run an ordinary at the premises on July 21, 1761, which was renewed on February 15, 1763.[5] Linton was financially backed by Hugh West, a local attorney and prominent land owner, who had made his wealth through inheritance and tobacco.[6]

Evidence of the Colchester Inn can be found in the accounts of the Colchester store of the mercantile firm of John Glassford & Company, established in Colchester in 1758.[7] As can be seen in the account below, the tavern keeper William Linton made several purchases from Henderson’s Colchester store in 1761.[8] The purchase of the tea kettle suggests that, even in the American colonies, the English still enjoyed a nice cup of hot tea when they were away from home. The candlesticks infer that there was an inviting, cozy atmosphere for the patrons of the Fairfax Arms.

Benjamin Grayson ran into some financial troubles in 1762 and was forced to mortgage the property, and eventually put the property up for sale in 1767. Hector Ross purchased it in 1772 but sold it again a year later to Alexander Henderson, the manager and owner of the Colchester store where William Linton made his purchases in 1761.[9]

During the late 1770s, the Fairfax Arms started to provide another important service for the residents of Colchester. Alexander Henderson and William Thompson were the town’s postmasters, and it is believed that they operated their postal business from the premises. Henderson sold the property to Thompson who in July 1784 tried to put the property up for sale in the Virginia Journal and Alexandria Advertiser. However, he was unable to sell the property and held onto it until his death in 1800. According to the listing, excerpted below, the property by that time included a stable and a meat house.[10]

A large and convenient dwelling with excellent cellar, four rooms on a floor with a fireplace to each and three rooms above. Good kitchen with oven adjacent to the fireplace, a room at one end with a planked floor, lathed and plastered, glass windows, was intended for a housekeeper or white servant; stable for eight horses and a meathouse, garden and about one acre adjacent in grass well inclosed.[11]

What makes this tavern extra interesting is that it is one of only two original buildings built in Colchester in the 1760s still standing today. Now a private residence, the building represents an important part of colonial America in Virginia. Because of its value to the port town of Colchester, the Fairfax Arms was included in the Historic American Buildings Survey in 1933 and was listed on the National Register of Historical Places in 1979.[12] 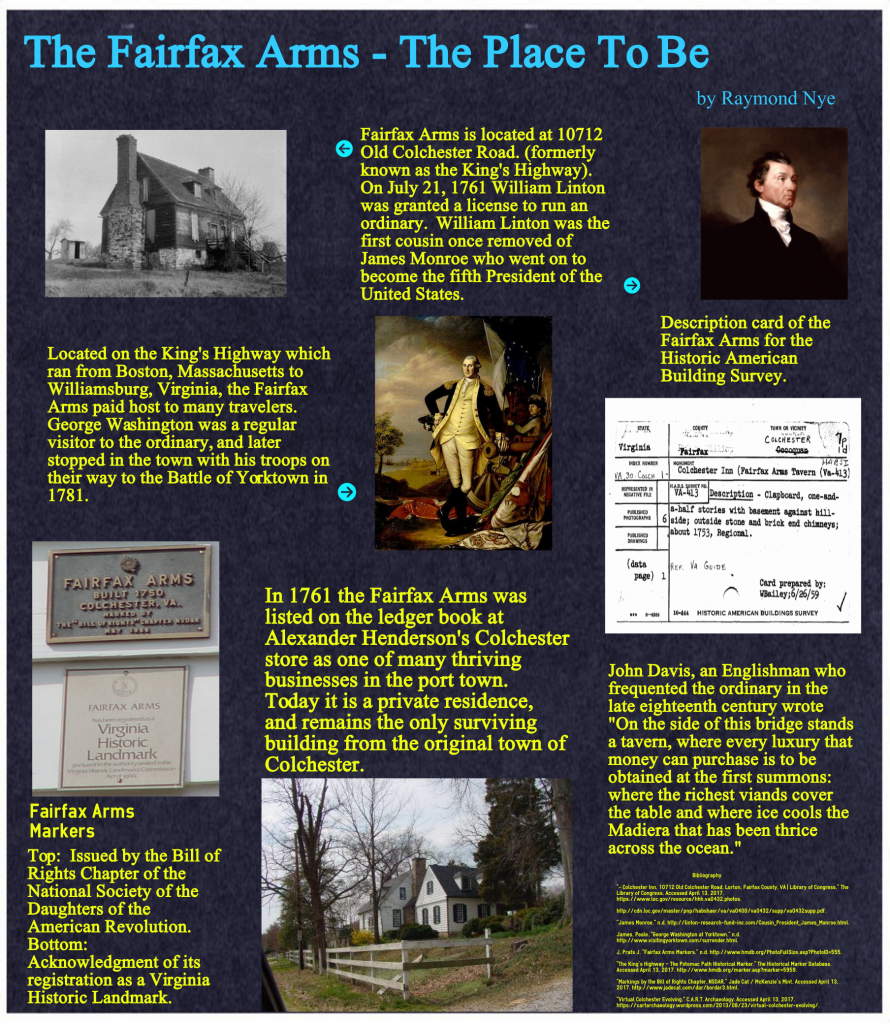