Throughout written human history, all of mankind can relate with one another on one thing: getting drunk. Rum in 18th-century colonial America was, without a doubt, one of the most bought and sold consumable good in the Glassford and Henderson Colchester store per the Ready Money accounts from 1760 – 1761.[1] The delectable good was not only a social lubricant, but it was also used for many things during the time such as daily refreshment, as a clean drinking source, and as a medicine for the sick.

Rum was not only imported, but also distilled in the colonies. being traded between colonies, but also exported to the rest of the Atlantic world.[2] The sugar based drink was not only prevalent in the British American colonies, but also the rest of the Atlantic World. This was a result of other alcoholic beverages such as beer and cider which “didn’t last as long, took up too much space to transport, and raw materials were readily available to make rum in high volumes.”[3] Not to mention the alcohol content was higher and rum would keep longer than beer and cider.[4] Furthermore, rum was cheap! However, American colonial rum was cheaper than Caribbean rum, mostly because Caribbean rum was more refined and smoother.[5]

The Glassford and Henderson Ready Money account for October 1760 indicated large volumes of rum being sold, from gallons to pints, with 80 transactions throughout the month.  Price varied only slightly with most quarts being sold for one shilling and six pence.  There was only a few rum transactions that might hint at the difference between American and Caribbean made rum – transactions for only a pint at nearly one shilling and for one and a half quarts valued at two shillings and six pence, both nearly double the normal cost.[6] So being an inexpensive commodity, almost everyone could afford it, and having the option between premium Caribbean rum and cheaper American rum, the quantities at which people could buy the rum was endless.

In colonial America, alcohol was widely considered as a medical application as well as a pleasurable good, and also contributed to their mental state, kept them warm and even made them stronger.[7] Rum was thought to cure many of the illnesses that were common including pregnant women giving birth who were given rum as a means of anesthetic. Rum was used a source of something safe to drink, as dirty water would cause illness; the practice of drinking alcohol originally came over from Europe where polluted water supplies were widespread.[8]

In conclusion, rum was a social lubricant, economic powerhouse, medical application, and a source of clean drinking supply. Rum was one of the most important commodities of colonial America. 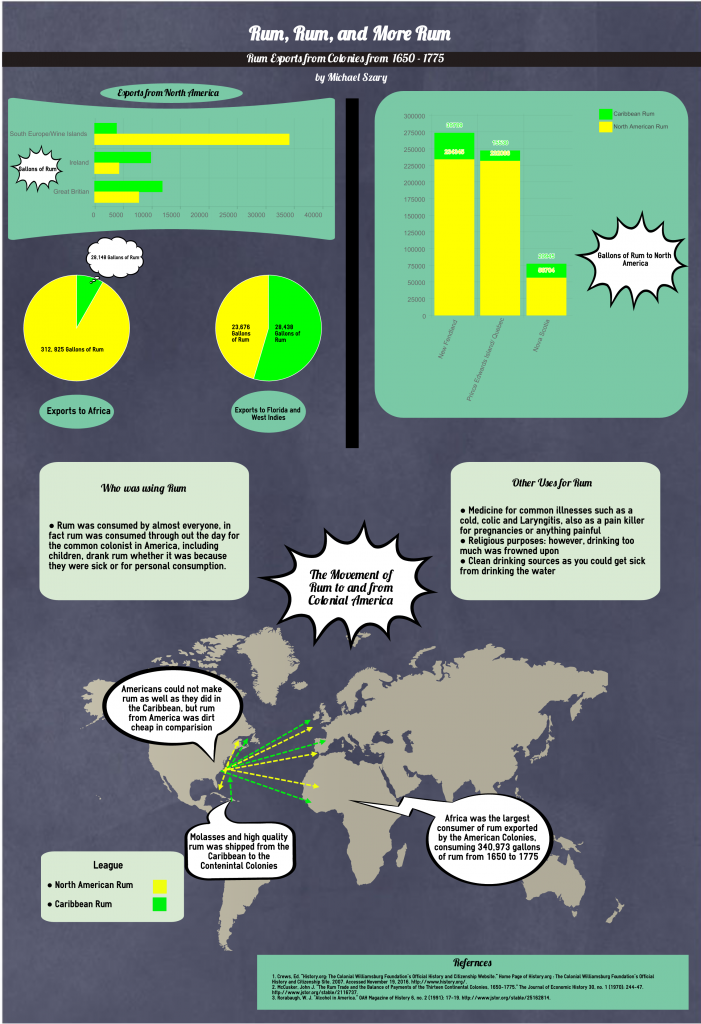