Black Powder and Hot Lead: A brief history of colonial munitions in mercantile and imports

The commodities of gunpowder and shot (lead ammunition) were not only common staples in eighteenth-century American households. These two items were versatile and pragmatic. Gunpowder and shot were certainly used to place food on the table; however, they also were significant for personal protection in an untamed wilderness and, later, in building a new nation. To further understand these necessities, primary and secondary sources have been consulted to materialize these items, to explore who was purchasing them, their purchasing status as a household staple, and the manufacturing and importation process that led to their arrival in the New World.

Gunpowder and shot were imported to the English colonies directly from Great Britain. In the early years of colonization, it was both more cost and time effective to import these items from already established manufactory hubs across the Atlantic than constructing new plants locally.[1]  Physically, gunpowder appears to be the shavings of a metallic substance, dark in color and flaky to the touch. Shot (ammunition) conversely, came in the form of round lead balls that varied in size due to the variance of musket caliber or gauges (the diameter of the bore of the rifle). By the latter end of the 1700s, the British Empire had established a quasi-standardization of musket balls due to their dependence on the Brown Bess musket (.71 caliber).[2]  Shipments of gunpowder were transported across the Atlantic in large barrels only to be divvied and distributed amongst consumers. The personal transportation of gunpowder for consumption came in the version of a smaller more convenient container. The use of powder horns was common place in the 18th century.[3]  These horns would be the hollowed horn of an animal and filled with gunpowder with a plug to enclose the powder and a small opening at the opposite end to feed powder to the matchlock of the rifle.

Upon studying the mercantile ledger from Glassford and Henderson’s Colchester store’s Ready Money account for 1760-1761, this is perhaps the most enlightening resource in uncovering the enigmas of gunpowder and shot. In those accounts, the ledger specified a vague sense of the cost of the ammunition and the volumes of purchases for cash. For example, the Ready Money account entry for the month of September, 1761, has five purchases of powder and shot together, and one purchase each of powder or shot. Based on this sample, powder appears to be valued at about two shillings and six pence per pound, while shot was less expensive at only 6 pence per pound.  The most common purchase was for ½ pound of powder to every 2 pounds of shot. [4]  This example presupposes that the commodity of gunpowder and shot was relatively affordable to a citizen of the New World that might have arrived as a homesteader, trapper, or entrepreneur. It becomes obvious to the reader that these items were used in daily life and from the frequency of the purchases which implies various applications and steady use. 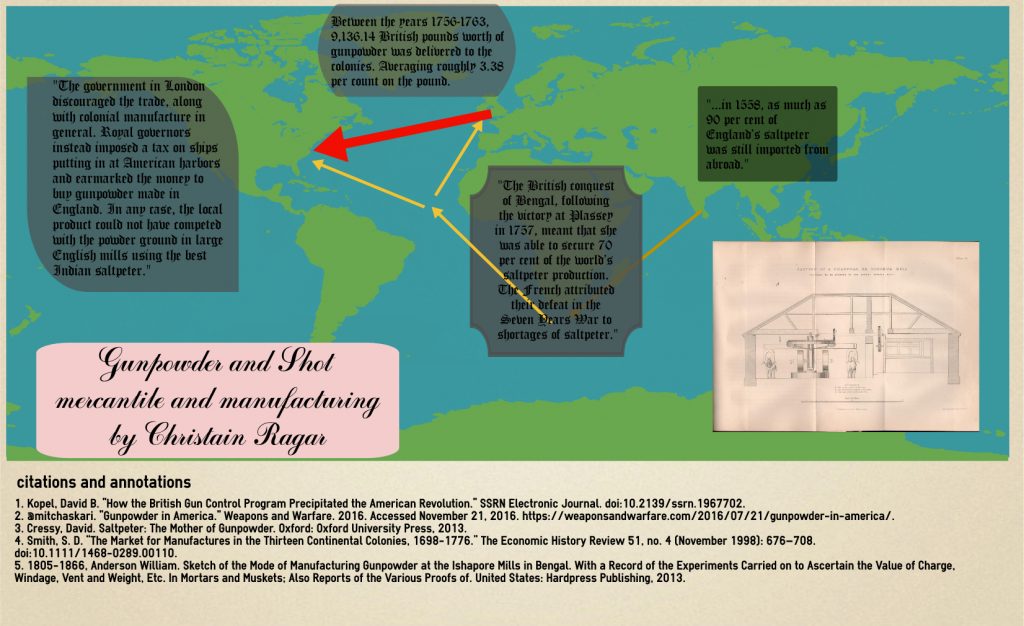